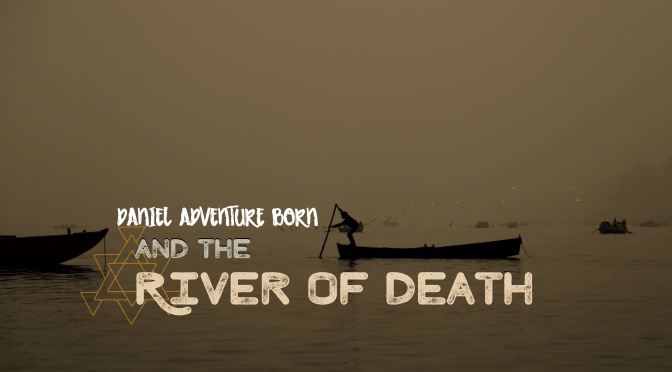 Manish told us he had a friend who could take us on a boat up the River Ganges to see the body burning rituals and the Evening Ganga Aarti ritual performed nightly here in Varanasi, also known as the spiritual capital and the holiest of the seven sacred cities in Hinduism.

Also, probably one of the most obscure places I’ve been in a long while.

Body burning? Yes, that’s right. Varanasi is famous in India for Indians to make their pilgrimage to burn their loved ones and brush their ashes in the River Ganges. They come all the way here because they believe that death in Varanasi will bring salvation to their recently deceased loved ones. The body burnings are public and numerous. But only the men are burned to cleanse them of any impurities. Pregnant women and children are usually salvaged and instead their corpses are usually thrown into the river.

I met Manish, along with a few other backpackers while staying at Stops Hostel in Varanasi. I was recommended to go there from a scruffy Australian backpacker I met in Mumbai after deciding where to go next. It looks like India really wore him down, but he was still packed with tons of info.

“I want to go somewhere cool for New Year’s,” I said to the scruffy backpacker. “Not the party scene of Goa.”

“Definitely check out Varanasi then,” he proclaimed and began to describe his experience.

I looked it up and it seemed interesting enough. I’ll go there. 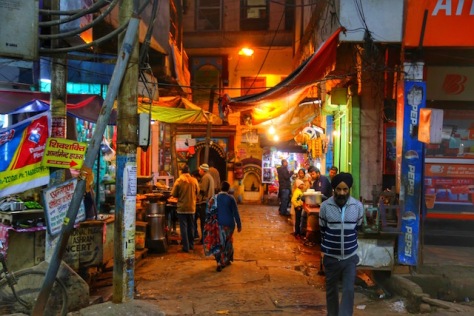 I’ve done three trains already and decided to save the hassle and fly over from Mumbai to Varanasi this time. The flight was a short hour and ten minutes. The traffic getting to Stops Hostel from the airport was horrendous and fume inducing. I’ve been noticing that the further north in India I get, the more hectic it seems. 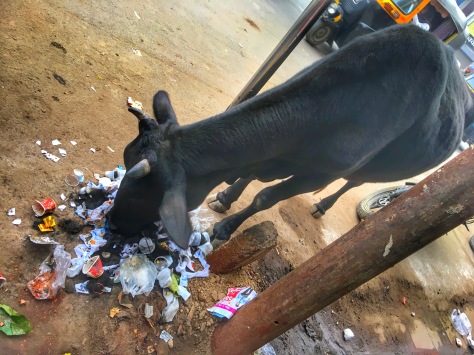 I entered Varanasi under a gloomy fog that never went away. But thankfully, the travelers I met at the hostel lifted spirits. They were a neat assortment of individuals from all sorts of places coming through India from all different directions. My 14-bed dorm was spacious and easy to settle in. Surprisingly, I had a bit of privacy in my little corner of the room.

One of the traveller’s staying at the hostel was Manish, an Indian man from Delhi who came down to Varanasi for a holiday, who resembled a modern-day Ghandi. He had the completely bald head, long goatee, and perfectly round glasses and kept a ‘shaman’ demeanor about himself. After going over some chai tea the hostel served to us daily, Manish invited three of us along with him down on a boat through the Ganges, just before New Year’s Eve. It’s easy to get a boat down the river but I thought it would be neat to go with Manish and his friend to get more of an unfiltered experience.

The fog hasn’t cleared, so we bundled up and set off to the Ganges which was only a short tuk-tuk ride east from where we were.

The riverfront was depressing as all heck.

As holy as this city was supposed to be, nothing about it felt “holy”. It felt more like the gateway to freakin’ Hades than an actual spiritual site. Hundreds of people, trudging along, with the most unhappiest faces ever as they walked by. I guess it didn’t help that they probably just burned their loved ones to a crisp. I’d see people carrying dead bodies wrapped in sheets and covered with typical Indian floral down from the alleys toward the burning stacks of wood near the river. Trash was littered everywhere and beat up dogs roamed the ghats. It was a sight to behold. The dim fog and nippy weather just added to the gloominess of it all.

We found Manish’s friend on a small wooden rowboat near one of the ghats. He spoke zero English, so Manish served as our middle man. The four of us got on his boat and almost immediately he took off.

If I were to rename this river, I would call it misery, because that’s the vibe I got from it. The overcast was a dull brown. BROWN! Not like an appetizing chocolatey brown, but more like a “death is near ” brown. I don’t think I’ve ever been to a place that reeked of gloom more than here on the River Ganges. Most of it had to be due to the weather because the images on Google didn’t look like this. This was like an Indian version of The Mist.

His wooden boat was just one among hundreds of small boats going up and down the motionless river. We were able to get close to one of the burning bodies as we glided closer. Photography is forbidden, but the rower gave us brief permission at that moment. The body, one of dozens burned daily, burning down to ashes which would take nearly three hours to do so.

The water appeared numbing, but still I stuck my hand in it to feel for myself. It was surprisingly warm to the touch. Warm enough for locals to bathe in the corpse-filled river because of it’s holy properties. It’s believed than anyone who does so will be rinsed of sins and blessed.

I don’t know man… I saw a bunch of headless goats, dogs, and human limbs floating in there, not to mention garbage. It was anything but heavenly.

Some minutes later, night began to fall and the Varanasi river front began to dazzle with lights and colorful works of art that were hidden during the day. 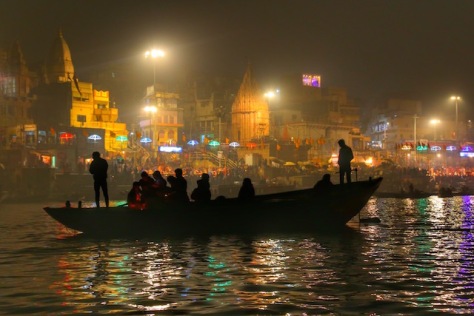 Boats of all shapes and sizes, filled with locals and tourists alike, began to congregate near Dashashwamedh, one of the many ghats of the river front. This area is where the Evening Ganga Aarti was held. Our guy rowed closer to where ritual site and tethered our boat to a few others lined up against the docks. There were five individuals, all priests at this particular ghat, holding a variety of candles, performing movements and chants in a rhythmic fashion as the crowd and devotees on land and the ones on the river watched as they performed a commitment to their Lord Shiva.

I jumped across neighboring boats to get on land, closer to where the action was.

We stuck around for a bit before the ceremony ended. We released our boat and headed back down stream. We were greeted by another headless corpse of a goat floating next to us. What’s with all these headless goats?

I felt as if I were in some purgatory, trying to figure out life or something. Also, one of the most bizarre places I ever spent New Years.

I closed out the New Year with the rest of the traveler’s back at Stops. Drinking isn’t a big thing here and neither is partying, two essentials that are almost a necessity for ringing in the New Year. However, different and unique is exactly what I wanted this time around. I got to spend it with a bunch of brave individuals who didn’t mind being away from family and friends and I also got to see a bunch of dead stuff to boot!

2017 will mark the first time in my travels that I won’t step foot back on US soil for the year’s entirety. At least, that’s the plan unless something unforeseen happens. 2017 will likely see The Quest to the Seven Continents take me deeper into Asia, further into Europe and down into Africa. 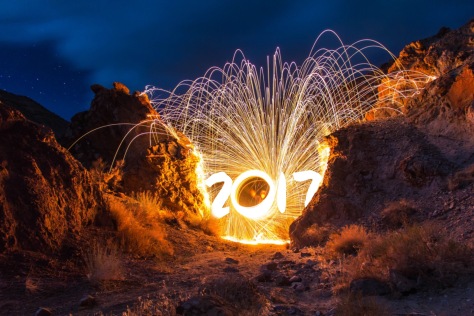 But my plans are absolutely flexible and loose, so things may change. Especially given as how unpredictable this quest has been, particularly here in India so far.