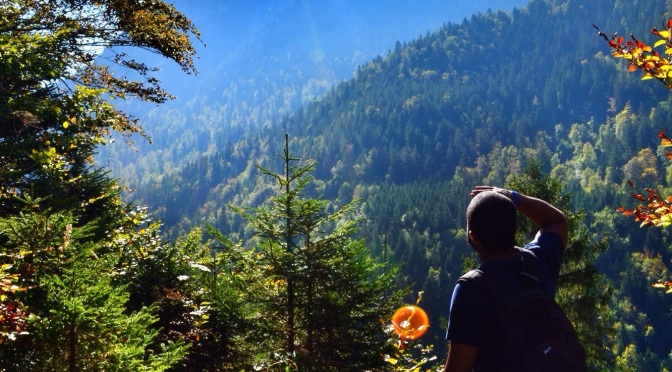 So far, Oktoberfest has been really fun (when you throw in lots of beer, anything can be fun). Before my third and final day attending the festivities, Miriam wanted to show me around not just Munich, but Bavaria as a whole. Of course Bavaria is too big to show in just a couple of days so she took me to a spot where I oughta see. I have a soft spot for giant castles, so she took me to one called the Schloss Neuschwanstein. It’s presumedly the castle Disney used as inspiration to make their castle in Disney World.

The drive was two hours. By the way, I am not a great person to have with on long car rides. If I’m not the one driving, I tend to fall asleep almost instantly. Most of it has to do with the motion sickness tablets; one of its side effects is drowsiness. I wish there were some tablets that didn’t make me want to sleep! Anyways, we made it to the castle grounds relatively early, by the suggestion of Miriam’s father. If we didn’t get there early, we’d be swarmed with iPad welding tourists! Those guys are bananas.

We purchased our tickets for entrance into the castle and made a short hike to the castles base. This castle was ginormous! Probably the biggest castle I have ever been to and I’ve been to quite a few! 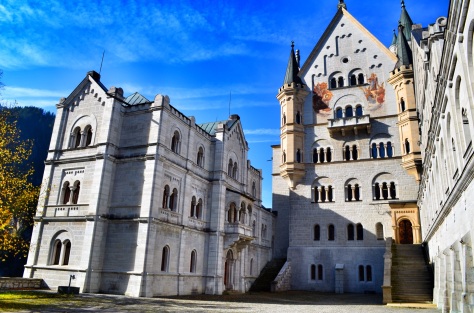 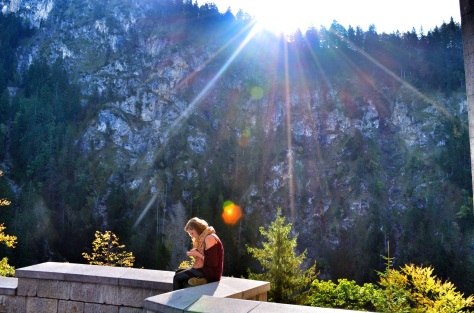 We had an early tour group and in great timing too because gangs of fanny packs and iPads starting showing up in hoards. If you’ve been a regular follower of my blog, then you’d know that guided tours bore me to the brink of death. This tour was no exception. Of course the inside of the castle was cool looking and all, but our prude tour guide wouldn’t let anyone talk nor take photos nor touch anything nor barely breath. Normally when places warn us we aren’t allowed to take photos, I’ll try to sneak some anyways, but I wasn’t inspired to sneak some snaps here at all. We did have a pretty sweet view of one of the lakes below from the castles balcony. 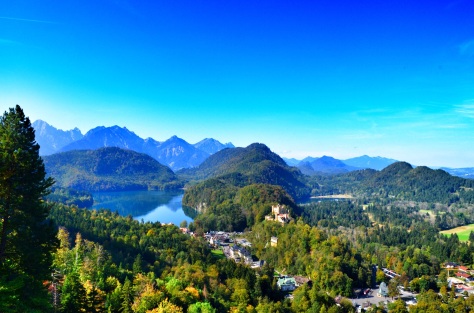 The castle belonged to a guy called King Ludwig II. Based on what I found out about him, he was a swan loving introverted, nocturnal human being. He didn’t like having company over, he had an entire room dedicated to swans, and he slept mostly during the daytime and was active during nightfall. One of his bedrooms was also a dining room…for himself! What a character this guy was.

If you ever go to Schloss Neuschwanstein, skip the overpriced tour…trust me. The real magic is outside of the castle and is completely free! Once the tour was over, Miriam and I walked over to a bridge overlooking the castle. What an amazing view! 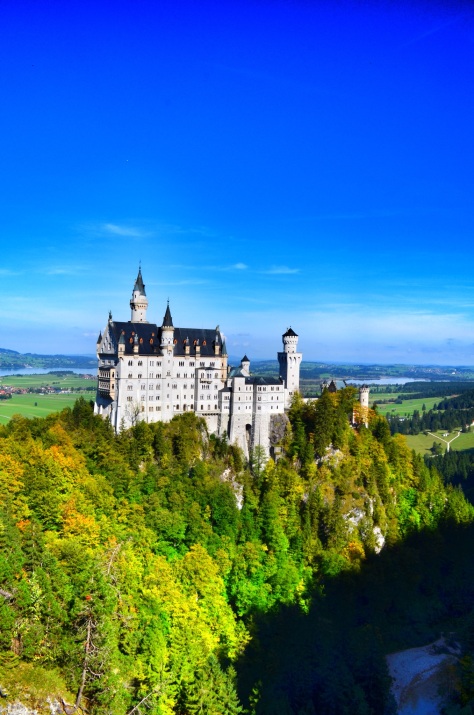 From there a trail led on to the tops of the mountain nearby. A trail designed for fanny packs and iPads.

“We’d get to the top so much faster if we cross these barriers”, I told Miriam.

The barriers were placed with signs in German that read something the lines of “Danger! Do not cross!” Something like that? We crossed anyway.

And yes I was correct, we ascended so much faster than if we took the safe path provided for us. I was glad that Miriam was game for a little rule breaking. We eventually reached a point where there wasn’t anyone around. We certainly were off the marked path. We continued on anyways. The unbeaten path was not dangerous at all so no worries. We made it to as about as high as we could and we were the only ones. There were people way down below looking at us probably thinking “How’d they get way up there?” We had awesome views of the castle and everything surrounding it! 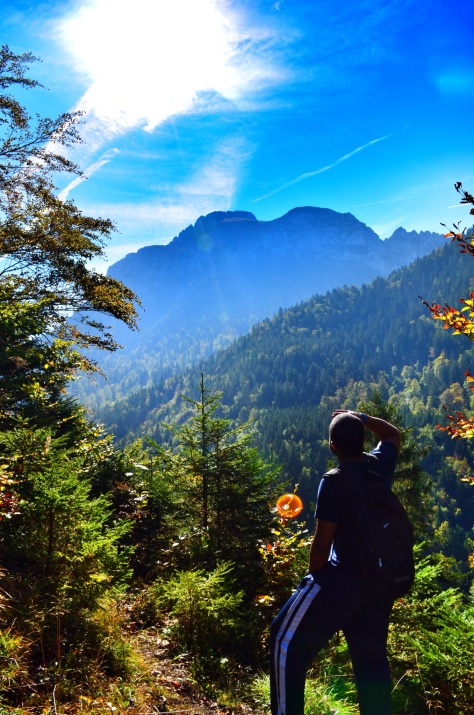 We also had a view of this… 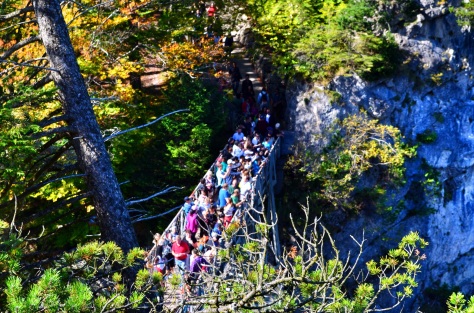 I’m glad we were able to avoid that mess on that bridge. It was clogged with tourists! We were safe in the tranquility of the mountain top, completely solitary from the wake of the masses below. This place was great and the scenery was surreal. Whenever I see places like this, I really have to take a moment and soak it all in otherwise it doesn’t feel like I was really there.

On our way back, we went down the same way we came up. It shaved off plenty of time and wasn’t difficult at all. If you ever decide to visit the castle, skip the overpriced tour and hike around the castle. Break the barriers and take the unbeaten path. It wasn’t dangerous whatsoever. Those signs were designed for all the fanny packs and iPads that visit in the busloads. As for the castle itself, if you want to know about it and its king, go to Wikipedia. It’s far more entertaining.

We went over to the lake we saw from the top and actually went right up to it. This had to be one of the clearest, calmest lakes I’ve ever seen. The lake cast a perfect reflection of the woods and sky above. If I were a duck, this is where I would want to live.

We were growing hungry so we left the castle grounds and drove over more to a restaurant near the countryside. The food in Germany has been great so far! I’ve never had so much bread in my life though. Seriously, so much bread. But it was so good, I didn’t mind it at all!

Thank you Miriam for showing me that place! It was pretty cool. That trip was the perfect way to relax before my final day in Oktoberfest and my final day in Germany for that matter.

Day three in Oktoberfest was destined to be the best one yet! Why? Because Björn was coming down to Munich for a visit and this would be the first time the three of us (Kevin, Björn, and myself) have been together since we parted ways in Cambodia last year. This time we decided to go to the Hacker tent, one of the most popular tents. Miriam and I arrived around 11am and joined Björn and a couple of his friends. Later on, a few people we met earlier and then Kevin, Nicole, and Guiren joined in! It was great!

By this time I knew the words to a couple of songs and I knew the proper “la la la’s” to the songs they sing “la la la” to. I also wanted to beat my four liter mark I hit previously, so then I went bananas on the beer. It was my last time in Oktoberfest with some cool German friends, so I wanted to live it up! 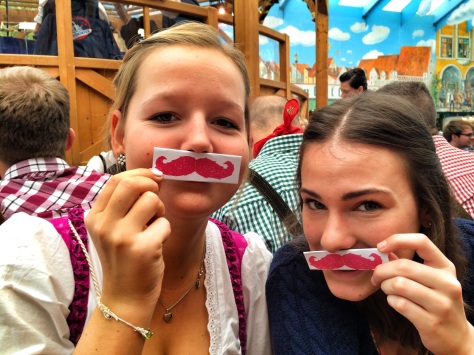 Time flew by and the rip I accidentally made in the crotch of my Lederhosen grew a little bigger, my wallet was getting lighter, and more random strangers were squeezing at our table. We had a great spot too, right next to the German band!

It was almost closing time. I was able to manage five and a half liters of beer. Surprisingly I wasn’t hurting at all. The only thing hurting was my wallet. That’s a little more than 60 Euros down the drain. I budgeted for Oktoberfest and actually spent way less than what I initially thought. I had free accommodation thanks to my incredible German friends, I had a free Lederhosen thanks to Miriam, and I didn’t have to reserve any tables or anything because we joined in with friends who already held tables for us. I was completely spoiled here and extremely fortunate. Most travelers who come specifically for Oktoberfest pay boatloads for accommodation and proper attire. 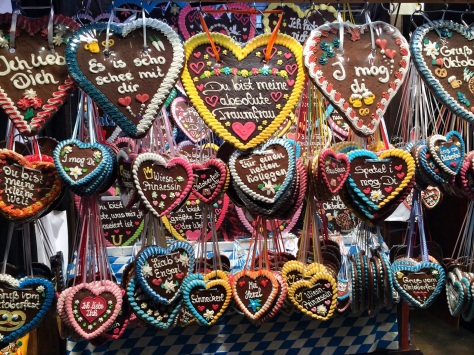 I can now officially mark off task #16 on my ATLAS (Attend Oktoberfest in Munich, Germany).

With that, my trail through Germany is complete. I’ve had a heck of a great time visiting friends I have met from all over the world. From Hamburg of the north to Munich in the south, Germany has been most welcoming. I said see you later to Björn, Kevin, and Miriam once again.

My next and last stop in Europe is up next and that’s just a two hour bus ride down below to Austria!