Today was going to be a fantastic day. I could feel it in my bones! Instead of taking the train back to Stellenbosch, I called up my old friend Abdullah to see if he could take me back there. It was good to see him again. He gave me an update on what’s been going on around town since I left. On an interesting note, there were so many great white sharks in the ocean near us! It’s scary to think that we actually surf there. On the way home, I was hoping none of the boys weren’t at Mama Zulu’s waiting for me. I had bought birthday party supplies I wanted to set up before they got there. And thankfully, none of them were there yet.

Literally, two minutes after I got home there was a knock at my door. I could tell it wasn’t Buscha. Whenever Buscha knocks at my door, the knocks are very light and faint. I cracked it open and peeked out to see who it was. It was Avele, Mawande, and Mawande’s little brother Onge. Shoot! I don’t care if Avele sees but not Mawande, because it’s his birthday. I didn’t set anything up yet so I let them in but locked Mawande and Onge in my room with my iPad while Avele and I set up the sitting area with balloons, streamers, and party hats. Avele even brought over a chocolate cake. After about ten minutes, I let them out. At the same time, the rest of the boys and Aphiwe’s sister showed up. I was hoping Aphiwe wouldn’t bring his sister, only because we were going into town all day today and she’s a big liability. She was fine to stay for now but unfortunately I had to tell Aphiwe we had to take her home before we went into Stellenbosch. It was a great time at Mama Zulu’s! Avele made some cards and put a welcome sign on my door greeting the birthday boys. It was Onge’sbirthday a few days ago as well. They told me a couple of days ago that it was Chris’ birthday on Sunday. (How do they remember these things!) So they put his name on the door too, even though it was spelled incorrectly haha! I told them if they wanted to make a happy birthday video for him, I would show it to him later. Needless to say, they were very, VERY excited about that.

Around noon, we made our way into town. There were nine of them, so periodically I would do a quick head-count to make sure I didn’t lose anyone. I thought I lost RiRi at one point but he was way, way behind taking his sweet time. So what was the first thing on our agenda? Ribs! The boys wanted Ribs from a place called Spurs. I never heard of Spurs but it’s a restaurant where the kids can play video games and chow down on great food afterwards. Spurs is located on the top floor of the mall in town, so we made our way there. Then suddenly, as we went through the mall, I froze. My nose caught a whiff of something. It was a pleasant, familiar scent that I haven’t smelled in months. I looked around to see where it was coming from but I didn’t see anything. I followed the scent trail as the boys stopped and looked at me very confused. “Where are you going Dan? Spurs is up here!” they shouted. I told them one sec, and finally found the source of that delicious smell. Never in a million years did I expect to see a Cinnabon in Africa! My friends at home know that I would do anything for just one of those delicious pastries. I had to stop and get one! Unfortunately, they didn’t have anymore ready and it would take twenty minutes to bake. No worries, I would get one later :).

At Spurs, I ordered up three of the biggest slabs of ribs they offered, a platter of buffalo wings, chips, and onions rings. It was more than enough to cater to my little friends and we had a feast! I ordered a burger with chips for myself. 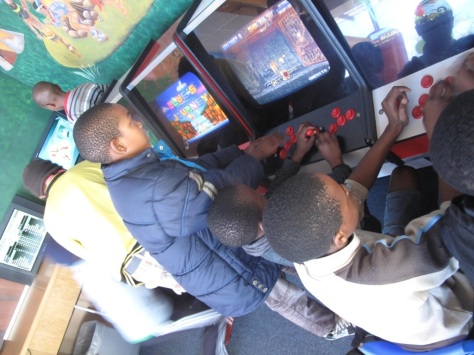 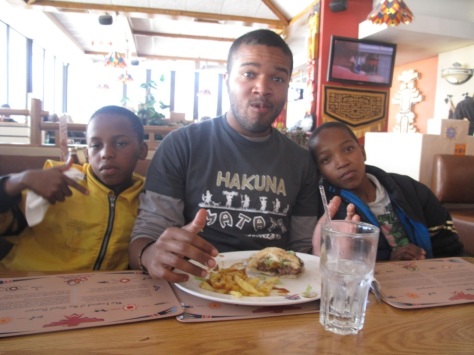 Next on the agenda: the cinema. The choices of movies we could see were very limited. It was between The Dark Knight Rises and Brave. I never heard of Brave but it’s a Disney/Pixar film. Usually Pixar films are pretty good. I took a vote and to my surprise Brave is what won out, probably because it was in 3-D. There was this lady who has been giving me the evil eye since I entered the movie complex, which I don’t know why. When we entered the theater, the boys were very chatty towards one another. “Are you responsible for these kids?” asked the evil lady. “Yeah” I replied. “You need to tell them to be quiet. My daughter is getting upset!” “You need to relax” I told her. “The previews haven’t even came on yet.” It was an almost empty theater and nothing was on the screen yet. I told them when the previews start, they had to be quiet though. In which they were.I bought everyone popcorn and enjoyed the movie. Well… at least they did; I fell asleep when it began. I tend to always do that haha! The evil lady gave me a death glare as we exited the theater. So I just smiled and waved back :).

Next up: football! We went into the park in the middle of town and split into teams. These kids have an infinite amount of energy which was good because I needed to work off my five-day splurge at McDonald’s! At one point I sat on the grass to take a quick break and out of pure coincidence, a lady walks up to me. It turns out to be Aphiwe’s mother. She was very nice and I was happy to meet her. We talked for bit as they boys ran around. She asked me to come by and visit her house whenever I got a chance. That would be cool.

After working up a severe appetite, I took the boys across the street to The Dros, an italian pizza restaurant and ordered up two family size pizzas. Mawande said to me that this is the fanciest restaurant he’s ever been to. Some of the others said the same thing. Toy Toy, RiRi, Ski, and Atha thought this was the perfect setting to take more pictures of themselves. As a matter of fact, they have been taking pictures everywhere we went so far! I have to buy another memory card later just for their use. These guys are not camera-shy at all.

We walked towards the minibus station and went to the McDonalds on the corner. They all ordered chocolate shakes. A great way to top off those delicious pizzas! But by then we were beat. We walked all over town and were stuffed with food. It was also getting cold outside, so after that we headed back towards Kayamandi. We hung out the rest of the night at my place. I downloaded some new games on my iPad yesterday that they played all night. It got so late that I fell asleep for a bit in my room while some of them were still there. I woke up and told them it was getting late and I needed to go to bed. It was a solid day today. By far my favorite Friday in Africa, or even period.