Whenever I book a hotel for anywhere, I like to make sure breakfast is included. It’s always comforting to wake up knowing there’s a full breakfast buffet waiting for me. The Auris Plaza was no exception. We woke up and immediately went downstairs to the lobby where servers were waiting for us. We walked into the dining room and just like I imagined, everything was laid out for the taking. We had our choices of a variety of fruits, meats, waffles, yogurts, CEREALS, juices, eggs, and all sorts of foods I never seen before. But to be honest, Chris and I weren’t terribly hungry. We were still stuffed from yesterday. Me specifically from all the ice cream and chocolate cokes I had. We only ate a small portion of breakfast though but were satisfied. We went back upstairs and went over a rough game plan for the day. From our hotel, you could see the Burj al Arab, one of Dubai’s most iconic pieces of architecture that sits on Palm Island. We figured today we could head in that direction and go to the beaches nearby and see whats there.

We took a cab to the Burj al Arab and found that we needed a reservation to actually get inside the building. Bummer. Instead we walked to a hotel nearby called the Jumeriha Hotel and went inside, just because. They had access to the beach but it would cost us 200 Emirati dirhams each! No way! We asked a lady there, how we could get to the beach for free and she pointed us in the direction which was five minutes away. We walked outside in the blistering heat for a few minutes before we finally arrived to the ocean. The water felt fantastic and there were waves sweeping by every few seconds. It was right near the Burj al Arab which created a nice backdrop for our swim. We busted out the GoPro and recorded videos of us gliding on top of the waves.

The ocean gave us a hankering for more water activities. We knew there was somewhere along the beach where you could jet ski, we just didn’t know where. After about an hour we decided to try and find something and thought the Dubai Marina sounded like the spot to be, so we took a cab there. The Marina was filled with restaurants and bars, but no sight of any water sports. We went to a Tim Hortons nearby to use their Wi-Fi to find out what kind of water sports were near by. We found a couple of jet ski sights but they weren’t really anywhere near according to the map. On the map I noticed the man-made island called Palm Island was right next to us. I had no idea Palm Island was in the shape of a palm tree! 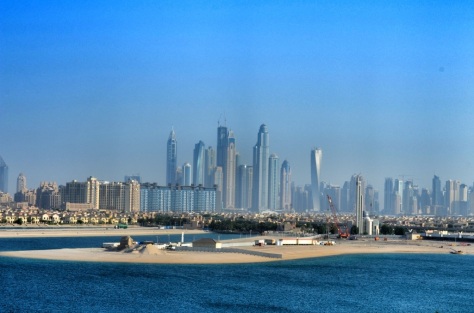 I also noticed that Atlantis, one of the best hotel resorts in Dubai, was on the island. The Atlantis is home to the Aquaventure Water Park, one of the top water theme parks on the planet! I ran the idea by Chris to go there instead of wasting our time trying to find a jet ski. It would also be cool to be on the awesome man-made island. He was on board, so we got on yet another taxi and set off for Atlantis!

As soon as we entered the island, the landscapes changed. There were hundreds of buildings that grew symmetric in interesting shapes and designs on each “palm” of the island. The island was more expansive than I initially thought and a sight to behold. You know how dogs get a kick out of hanging their head out of the car window with their tongues hanging out? That could of been me if I really didn’t mind looking like a crazy person in Dubai. The views all around were incredible! We eventually pulled up to Atlantis at the top of the island. We walked through the hotel, through the mall area to the entrance of the Aquaventure Water Park. We bought our day pass and locked everything except for my GoPro in a locker. We got there around 2 pm, which meant we had about four hours to squeeze everything in before the park closed. The water park was humongous! 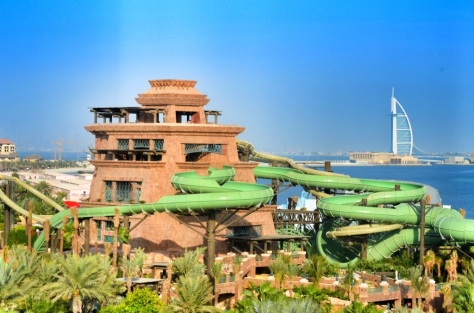 The whole park of Atlantis had a theme of an ancient desert empire built of stone towers and pyramids. Through Atlantis, a river flowed that sprouted in different directions which lead to different areas of the park. This river was the Lazy River that could take you just about anywhere in the park. Atlantis was filled with palm trees that covered two main areas for water slides. One area had the shark tank aquarium. Above the aquarium was a towering structure that claimed home to a few different water slides and rides including the “Leap of Faith”. Wanting to get our thrill fix in right off the bat, we headed to the very top of the tower for the Leap of Faith. The Leap is essentially a water slide on an almost completely vertical slope that gives you the sensation of free falling! Eventually, the angle of the slope would decrease until you eventually slid into the pool at the bottom. It was extremely fun but it was hard for me to keep my eyes open because I was going so fast and water kept splashing into my face. Fortunately, the GoPro recorded everything!

We took turns using the GoPro to record our rides and slides. We went on the Leap of Faith multiple times before we tried other slides on that tower, which were fun in their own right. What was cool was, we didn’t really have to walk much anywhere; many of the slides would drop us right into the lazy river, which we used to get to other areas in the park. We went to the other tower in a different part of the park that contained one of the newest thrill rides called “Poseidon’s Revenge”. The name alone sounded amazing. Chris and I literally ran like kids to the top of the tower. It was a water slide that I’ve never seen before! Basically, you are placed in a transparent cylinder tube. The ride operator closes the tube so you are trapped. All of a sudden, you hear a woman on a speaker countdown “3…2…1…” and instantly the floor beneath your feet drops open and before you know it, you’re plummeting at rocket speed into dark watery depths! You are going so fast that you never realize that you’re going through loop-de-loops until you eventually burst out into a water slide all the way at the bottom. I was worried I would lose my GoPro on this one before going in but I held a tight grip the whole way. This slide was awesome!

We went onto the other slides of this tower afterwards. One was called the “Slithering Snake” which was a narrow tube slide that wound round and round into a pool at the bottom. Another ride called the “Aquaconda” put us into a large tube with a couple other patrons, as we slid around on a huge water pike. It wasn’t long before we returned to Poseidon’s revenge for another go…and then another go right after! It was great!

We took the lazy river back to the other tower to get on some of the less thrilling rides we passed up earlier on. One ride had us in tubes that took us through a tube that went through the shark tank aquarium.

We spent a good chunk of time just riding as many slides as we could before we grew hungry, of course. But before we left the park, we wanted to go back to the locker room, grab our regular cameras, and walk around to take pictures. 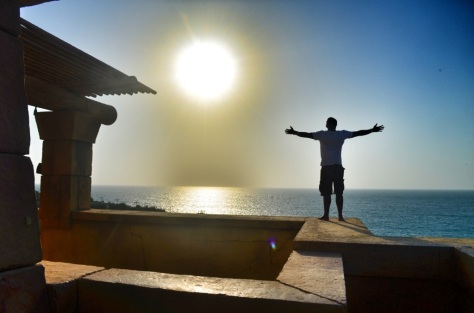 There were many great places in Atlantis to eat but we decided to head to another attraction in Dubai to grab dinner, to the biggest mall in the entire world – The Dubai Mall! We grabbed a taxi that eventually dropped us off at one of the biggest complexes I have ever laid witness to with my own eyes! The entrance to the mall was like a hotel, where valets waited to take guests cars for them, including this sleek red Lamborghini. 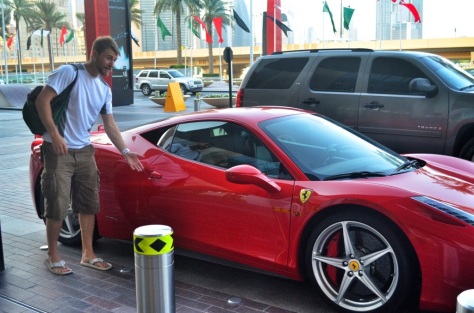 As we entered, we saw signs directing to the Dubai Fountains. The Dubai Fountains, from what I heard, is a water show that takes place every 20 minutes after 6 pm at the fountains of the mall. It’s reminiscent of the fountains at the Bellagio in Las Vegas actually. Before we found a place to eat, we decided to head there since it was almost 6 o’clock anyways. We made it early enough where we had a perfect view of everything. We were right in front of the tallest building in the world, the Burg Khalifa! Seems like Dubai has the biggest of everything in the world doesn’t it?
Soon, a couple minutes after six, the show began. Arabic music played in the background while the fountains danced away. It was a quick show that I would say was on par with the Vegas offering.

Afterwards, we were still starving and beelined straight to the food court! On the way there, I spotted my ultimate guilty pleasure…Cinnabon! I made a detour there and ordered up a classic cinnabon and ate it on the way to the giant food court, which had just about every restaurant you could think of and then some! We eventually chose an Italian restaurant where I ordered up a nice chicken alfredo pasta and Chris ordered a pizza. We stuffed our stomachs to the max! We decided to head back to Auris but getting out of the mall became a challenge in itself! It took us forever to find the exit with the taxi rank!

Once we got back to Auris, we had set up a time to Skype with Hanneke and Mieke back in Kayamandi. A nice surprise was that RiRi, Mawande, and Buscha were also there during the Skype session and they were able to chat with us as well! The reception was wishy washy, but we were able to give them a brief tour of our hotel, including a water show performance Chris put on for them.

After sometime on the roof of Auris wandering about, we went back to our room and called it a night. Today has been the best! We had no idea what we would do tomorrow but all we knew for certain was that it would be a good time regardless of what we did. So far, Dubai has exceeded all of my expectations!