The best thing about this unplanned trip is never knowing exactly what I’ll be getting myself into. For example, I didn’t know that I was going to surf the sky!

We stayed an extra day in the city of Granada, Nicaragua, which is similar in appearance to Antigua, Guatemala except without the cobblestone roads and fireworks.

We stayed at a hostel called the Panda Lodge, which was simple and basic. All I really need is a bed and decent wi-fi for blogging purposes and I’m all set. Luke, Tyson, Deb, and I decided to head further down Nicaragua to the town of San Juan Del Sur, also known as the backpacking capital of Nicaragua.

This time we opted to take a couple of chicken buses all the way to San Juan, which proved to be extremely cheap but a hassle. Honestly, it wasn’t too bad. The price more than made up for the slight discomfort. The chicken bus dropped us off at the front of the entrance to our planned hostel, The Naked Tiger. We’ve heard many great things about this place which is known as the party hostel of San Juan. While backpacking, it’s neat to submerge in atmospheres like this because exciting stories always come from it and there’s always tons of new people to meet. A shuttle truck belonging to the Naked Tiger picked us up and drove us to the hostels entrance which was situated on a hill overlooking San Juan Del Sur and its Pacific Ocean. 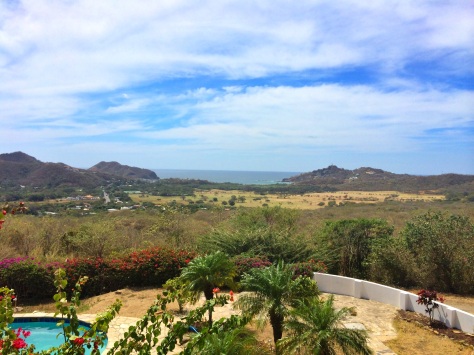 At first glance, the hostel looked more like a resort. I couldn’t believe how upscale and cushy it was. This was the party hostel I’ve heard so much about? More like resort hostel. One of the best looking hostels I’ve ever stayed in. We were greeted with a free can of Toña beer and a beer bong. Now THAT is how you greet a guest at a hostel!

Everyday at 5:15, just before sunset, everyone grabs a beer and gathers on the pools edge looking out towards the sun. Then all at once, everyone shotguns their beer. It’s tradition here that I was more then happy to take part.

It was becoming more and more apparent that this was indeed the partay hostel I’ve heard so much about. Two backpackers we met in El Salvador, Ryan (Australia) and Lisa (Canada), moved from their hostel in the town center up to the Naked Tiger with us. They really are good people.

One day, Luke, Tyson, Deb, and I went down into town with the intention of climbing up to the Jesus statue we saw on a cliff at the end of the beach. Luke and Tyson split to find a volunteering opportunity while Deb and I continued towards the statue. Nicaragua is freaking hot so halfway there, I just couldn’t be bothered going there anymore. We turned around and went back along the beach and that’s when I saw it. A sign with a picture of a guy on a hover board gliding above water. It looked as though he was surfing in the sky! I darted towards the ad and saw a woman nearby at a stand with a list of extreme activities on the beach.

She giggled. “It’s fly boarding. You have to try it!”

She was a saleswoman that undoubtedly gets paid to say that, but I didn’t need any convincing. It was love at first sight. I looked over at Deb and told her, “I have to do this.” There was no question about it.

I asked the woman all sorts of questions and scheduled myself to fly board the following day just before sunset. It cost a pretty penny though- $90 for twenty minutes of flying or $140 for forty minutes. If I didn’t do it then I would regret it forever. I went back to the Naked Tiger, happier than ever.

The next day, around 4:30pm, I took the shuttle down to the beach and there she was waiting for me. I didn’t think I would get motion sick from this but I didn’t take any chances, especially after the debacle I had flying in the Himalayas, so I took one Dramamine. The woman showed me my board, which was the size of a skateboard with a whole lot of bulkiness. I felt its weight.

“This thing is gonna drag me down to the bottom of the ocean!” I told her while investigating it.

“No, it’s perfectly safe. You’ll be wearing a life vest and the hose attached at the bottom will propel you up” she said, always with a smile. Everything she said was with a genuine smile.

Underneath the board was an attachment for a giant hose, about 15 meters long that will connect to a jet ski. From what I understood, there would be a guide on a jet ski shooting up water through the hose to my board, thus lifting me into the air. It sounded and looked like this was going to be difficult.

“It’s easier than it looks” she said. “Most people are able to stand within the first five minutes.”

I hope she’s right because this looks pretty hard. She gave me a really brief training lesson about proper positioning and what not to do when I’m in the air. Keep your legs straight at first but then crouch as if you were snowboarding, but in the sky! It was go time. I walked towards the shore into the water where my guide was waiting. I floated on my back and stuck my feet into the heavy board as onlookers watched. I was the only one in the water doing this at the time.

“Just lay down and I’ll propel you further out” he said.

He proceeded to pump water into the hose attached to my board as his jet ski took off. I began to glide effortlessly in the water, further out into deeper territory away from the boats and swimmers near the shore. I just laid there in my life vest. It was actually pretty relaxing. Then he gave me a thumbs up.

The woman at the stand told me to stand straight up in the water when I began to feel pressure from the water on full blast. I lifted up, almost as if I were levitating, so that my knees were out of the water, but then I quickly fell back in. I attempted again. Same thing. Then I tried again until I was completely out of the water and floating in the air. I was instructed to “surf” in big circles close to the jet ski. Subtle movements was all it took to move the board around. It felt almost like I was snowboarding! Green Goblin!

At points I would ascend so high that when I looked down, I got nervous and would lose my balance. Boarding was fine but when you fell in the water, you fell hard. It hurt a lot!

“Dive head first when you fall!” shouted the guide.

Easier said than done bro. It was hard to control a fall when my feet were attached to what felt like a cement block. I tried to dolphin jump in and out of the water, like the pros did on the ads, but failed miserably with a painful bellyflop from meters in the air. I didn’t try that again. Even just holding a GoPro was distracting. I stuck with my gliding circles which I perfected by the end of my twenty minutes.

If I had to describe the feeling of fly boarding in one word, it’d be ‘weird’. I felt like I was on a hovercraft. It was one of the most unique experiences I’ve ever felt. My twenty minutes were up and as much as I wanted to continue, I was pretty water logged from falling so much. Twenty minutes was a good amount of time for my first go.

When I got back to Naked Tiger, I wanted to relive the moments I had fly boarding and do it again! Neat thing here is if I wanted to do it a second time, I’d get $20 off the regular price. I showed Luke and other backpackers pictures my guide took with the GoPro and they were quite impressed. I may have sold the idea to a few of them. I wanted to do it again the next day but I had other plans.

Tomorrow is what they call ‘Sunday Funday’, which turned out to be one of my most fondest, silliest Sundays on this trip thus far!

Every year class 9 and 10 get together to take a group photo. Later this photo is framed and presented to the students of class 10 as a pardon gift from class 9. #pokhara #sarangkot
Still a long ways to go.
There was a violent lightning storm in Pokhara last night to kick off the start of the monsoon season here in Nepal. ⛈ This was captured with my GoPro from the balcony of my homestay in Pandeli, Sarangkot.
Sarangkot Sunrise 🌅 #nepal #sarangkot
It’s the penultimate day as a Class TENer for Ranjan, Roz, Sagar, Basanta, Saugat, Sandip, Bibas, Dhiraj, Sugam, Rohit, and Manish! 🎓 These guys have been together in the same class since babyhood and now they’ll all be going their separate ways to college. 🏫 I’ve known these kids since they were in Class 6 and have had the privilege to see them grow over the years. #nepal