Sometimes strangers from strange places come into your life and change it forever. For this group of young Guatemalans, I was that stranger who came into their lives from out of nowhere.

When I arrived in Guatemala back in December, Roxy and I were the very first teachers of a new after-school English teaching program. We were thrown into the trenches of a mix of different locals, some with excellent English but most with little to none. Now, six weeks later, my very short stint was coming to an end and I’ve grown completely attached to all my youngin’s.

The past couple of weeks at the school, new volunteer teachers have been introduced. I’ve had full reigns of every class prior but had to give up some classes to the new guys. Since then, I’ve become something like a principal of the school. I assigned each student to their permanent classes, observed the other teachers to make sure they were teaching properly, and handled any problems associated with attendance and classroom structure. Principal Sellers at his finest!

For my last day at the school, I wanted to take a break from teaching and put together a fun time for everyone. It was also Ben’s last day, so he and I took the chicken bus to Alotenango early and loaded up on sweets and treats. We bought two piñatas for the younger classes and filled them with an assortment of colorful candies.

Soon the students began to arrive, knowing full well that it was my, Ben, and Luke’s last day with them. “No class today!”I told them much to their delight. We spent all afternoon with music, snacks, photos, and ultimately piñatas. 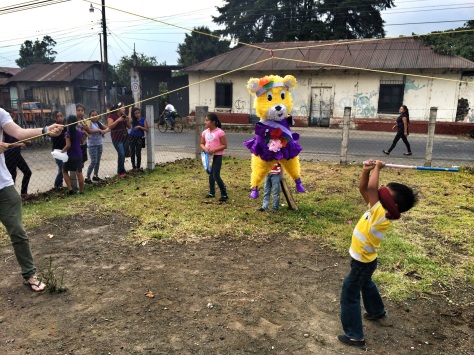 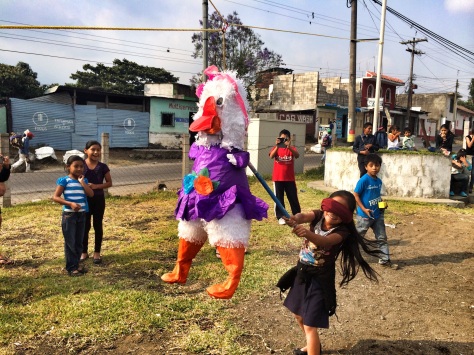 The oldest class arrived later. I’ve kept them as my own class since the very beginning and got them used to a weekly structure of new material. Each of them improved quite a bit since. I didn’t have a piñata for them, but instead we played games involving lots of candy, cookies, and cans of cokes as rewards.

I laid down the foundation for future volunteers to follow. A couple of the newer teachers have been spending the past few classes observing me and my methods. Hopefully everything Roxy and I started on the first day will trickle through from here on out: to learn English, but to have fun doing it!

Just like every time I say goodbye to my students in whatever country I’m in, it’s mighty tough. I did what I needed to do here and once that goal was accomplished, it meant that it was time to me to move on and meet others who need a little inspiration from this stranger from a strange land.

I only have a few more days left in Guatemala before I set my eyes on the next phase of this global journey. With me, I’m taking all the good memories that came from this school and adding it to my plethora of memories from my teaching experiences all around the world.

I’ll have some information to reveal later as far as to what the next phase of this worldwide adventure has from me.

And when I tell you, you’ll think that I’m absolutely insane!