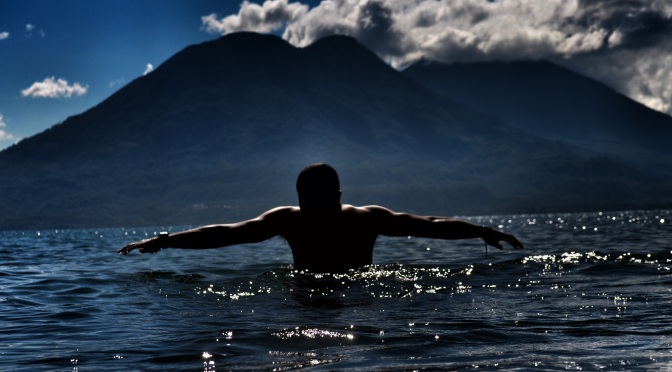 Just a few hours north of Antigua lies the deepest lake in all of Central America, Lake Atitlan. It’s a lake neighboring three volcanoes just to the south. German explorer Alexander von Humboldt called Atitlan “the most beautiful lake in the world”. That’s a pretty bold statement. I had to see it for myself.

Instead of organizing a tour to the lake like most of the visitors in Antigua have been doing, a few of us decided to just hire a shuttle there and do our own thing. I dislike the word “tour” and everything about it. I much prefer to “wing it”. I was happy that the group of volunteers I was with agreed with me. We were scheduled to leave in the morning and drive for about three hours. Not too bad compared to the ten hours it took to get to Semuc Champey a couple of weeks ago. Carly, Laura, Ellie, and I had first dibs on seats before we picked up the others who joined us on the shuttle, including Hanni and Abby.

I passed out to Carlos Santana’s Supernatural album on the way there. El Farol put me right to sleep.The motion pills I still had from Nepal worked wonders. But it wasn’t too long before I woke up from the swerving van zig zagging down a large mountain. I could see Lago de Atitlan as clear as day and it was beautiful, just like Alexander von Humboldt declared. 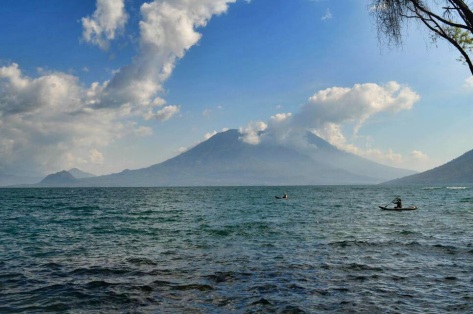 Part of the “winging it” process includes not booking an accommodation prior. In some cases this can backfire. It’s happened to me before a couple of times. I felt comfortable enough to wing it this time though. The holidays were over and visitors were heading back home. We managed to book a stay in the small town of San Marco where we were dropped off. Instantly, I was reminded of Pokhara and it’s Fewa lakeside offering. San Marco was similar except much more forested and on a much smaller scale. Also less condensed. We put away our bags in our rooms and made way to a place we were recommended to go called Hostal Del Lago. We tried to go there first but they were completely booked but still we went back because they had a cool outdoor hangout spot right next to the lake. And man, there were hippies everywhere! This hostel, and San Marco as a whole was crawling with them. I’ve never seen so many in one place before! I said that about Pokhara as well but San Marco blows Pokhara out the water. Thankfully, the hippies here weren’t the mega hippies that I sometimes encounter. Everyone here was cool and down to earth. Like for real down to earth. It was a really nice vibe! We noticed most of them had blotches of insect bites, most likely from mosquitos, all over their bodies. I heard hippies do not believe in using mosquito repellent because it´s inorganic and it hurts the environment. Thankfully, I didn´t abide by those rules and deeted up! The others in my group did as well. We savored in the day mostly unscathed from any insect bites.

It was Saturday which meant “The Event” was happening. I asked one of the bartenders what The Event was all about. He told me that a few DJ’s will come by and play for blends of techno-y, earthy, shaggedelic, trance-y sorts of stuff. I’m not sure what the heck that was but I would find out that night. We still had a few hours before sunset.

We relaxed. We chilled. We drank… 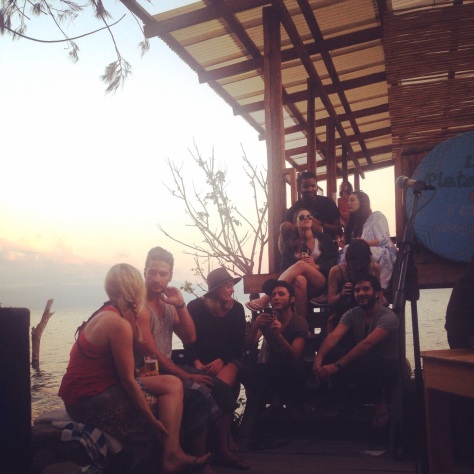 …and we had huge freaking burgers and burritos for lunch!

Near the lake, there was a bamboo hut perched a few meters up. It was a place for practicing yoga. Carly is a yoga instructor back in her home of Los Angeles and decided to work up a few poses in which I helped capture in photos. 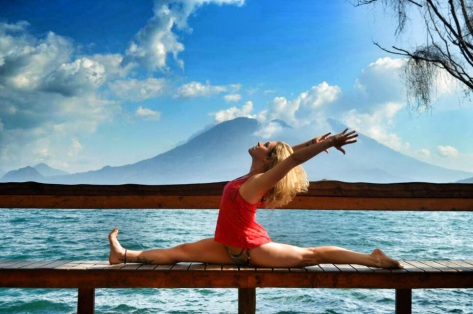 She did this spontaneously, much to the delights of the carefree hippies lounging there. Before we knew it, Carly made herself a bunch of new friends. There was some spiritual vibe thing going on and they connected with her on the spot and so she offered to give her new friends a free yoga class right then and there. They all were keen. There were yoga mats stashed to the corner of the hut they all could use. 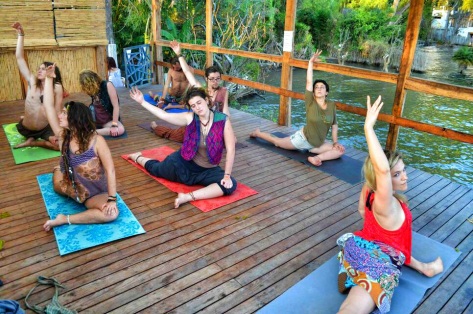 After about an hour, her new yoga students swarmed her and embraced her into a group huddle. Carly was loving it.

The day turned into night as a splash of pink painted the plumes above one of the volcanoes. Groups of DJ’s continued to play a blend of flutes and electronic music. 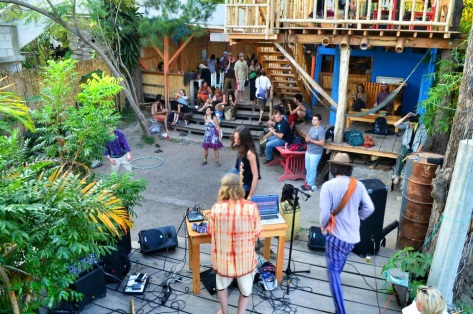 Slowly, the night turned into an Alice in Wonderland, Legend of Zelda, hippyville, steampunk kind of shin dig with the stench of weed in every corner. What is a steampunk? It’s a trend I’ve never heard of. I saw a girl dressed like the Mad Hatter arrive and Hanni informed me that she was a steampunk, whatever that is. There were others like her around, dazed and in a hypnotic trance from the tunes of the DJ’s. 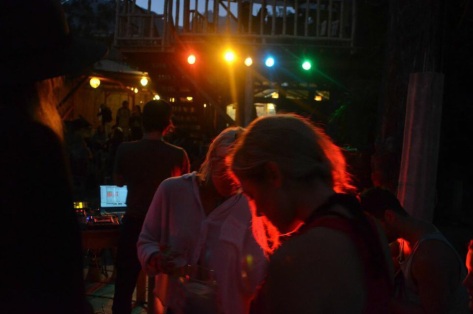 The night ended after Laura, Carly, Hanni and I split a couple of delicious pizzas just outside of Hostal del Lago. I’m not saying how much Guatemalan beer I had, but there are videos out there of me doing the snake wave dance in the restaurant’s kitchen.

I informed my group that the sun rises near 6:15 in the morning and that we should go to the lake early to see it. Most of them came and we snuck back to Hostal del Lago from our hostel. Del Lago’s door was locked so I climbed over the fence and opened it from the inside. We silently crept inside as a bunch of barking dogs made our trespassing known to the tenants. Still no one bothered us, it was too chill here. We walked to the lake but it was still pretty dark so we sat there in silence. The only sounds were of birds, bugs, and the gentle riffs of water. There were clusters of clouds in the sky with hues of deep purples and grays casting a haunting haze over Atitlan. I laid in a nearby hammock for a few minutes as the sun quietly rose, although we couldn’t really make out where the sun was coming from. There were too many clouds but that’s okay, it was still pretty neat. 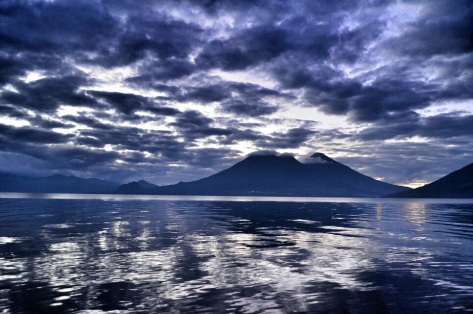 After the sunrise, we went to eat breakfast at an organic restaurant where I had possibly the best vegetarian sandwich of my life. Immediately after we beelined back to Hostel del Lago to join all the hippies, backpackers, and steam punks at the lake. The water was calm and it was hot enough outside for a cool early morning dip.

After buying a bag of sun dried roasted tomatoes that I really didn’t want (the seller gave me a lot of free samples of everything so I felt like I had too), we went back to the vegetarian restaurant to eat lunch before our bus came to take us back to Antigua. It was about an hour late and we found ourselves packed tight with other travelers on the trip back home from the lake. So is Lago de Atitlan the most beautiful lake in the world? I can’t possibly compare. I’ve seen some beautiful lakes in my times, but never a lake surrounded by volcanoes. English philosopher Aldous Huxley famously wrote that “Atitlan really is too much of a good thing”. I couldn´t agree more. This was bittersweet because it was Ellie and Laura’s last day in Antigua before they left in the morning to go to Belize. They were awesome to have around but I had a strong feeling I’ll be seeing both of them sometime in the near future.

At this point, I started thinking ahead. I have a few more weeks in Guatemala with still no concrete agenda laid out. The unplanned plan. I’m not sure what lies ahead or where I’ll be going, even so here in Antigua. All I know is that my poor family and friends back in Michigan are freezing their tails off right now while I’m over here enjoying the sun. Come join me in Guatemala everyone! I’ll show you around!

I have no intention on returning home anytime soon. 🙂

6 thoughts on “Too Much of a Good Thing”