Lately, I have been leaving notes on my door before I left so if the kids came over, they would know where I was and when I’d be back. Before, I would feel really bad every time I came home late and some of them were there at Zulu’s just waiting for me like lost little puppy dogs, not knowing when I would show up. I should of done the notes a long time ago.

As I was hanging out at Zulu’s with some of the kids, Mohammed (Mo) came over. His home-stay is in Grassy Park, a township close by my olds digs in Muizenberg, but I invited him to stay over a night in Kayamandi because it’s much better here. There was next to nothing to do in Grassy Park and I had the whole of Stellenbosch to keep myself busy. That same night, Isaac paid a visit to chat and he asked me when I wanted to skydive so that he could take me. I had originally planned on Saturday, but the conditions weren’t in my favor. Bummer. The weather in Cape Town or in Western Cape in general can change instantly! Isaac wanted to take me to grab some dinner in Stellenbosch. I had Mo come along but had to tell the kids that I had to leave. As we made our way to Isaac’s van, as the kids were leaving, they pointed out to a group of guys at the end of the street who were kicking around MY soccer ball! They guy who stole it from Ski lived right on the corner of my block too! I wanted to go and get it but I didn’t want to keep Isaac waiting, so I told the boys that I would get the ball later on. I probably missed the perfect opportunity but oh well; food is more important to me :).

Isaac took us to a restaurant called Cubana, close by in Stellenbosch. He wouldn’t take my money for the ride there so instead I secretly bought his dinner while he was eating. He was flabbergasted at the fact, but it was the least I could do because Isaac wanted to show me places all over Western Cape that I haven’t been to yet. Unfortunately, my time in South Africa is winding down fast so I have to save a lot of those cool places he told me about for my next trip back! After a great dinner, we called it a night and Isaac took us back to Zulu’s. The next day, Mo wanted to go to Cape Town. I had nothing planned for this weekend (because skydiving was cancelled) so I came along and we explored Cape Town, ate a lot of food all day, and watched rugby. The weather in Cape Town was beautiful! The sun was out and there was not a single cloud in the sky. It would of been the perfect day for skydiving. So instead, I had the impulse to go abseiling right then and there. I called the abseiling company and unfortunately they were going to close in a few minutes but they suggested I try and come in the morning. Will do! Mo and I stayed the night in Cape Town at a hostel called Carnaval Court a.k.a the WORST hostel in Cape Town! There were cockroaches in our room and their advertised wi-fi didn’t work. Worst of all, it was next to impossible to fall asleep. You could hear everything and I mean EVERYTHING that was happening outside. All of the music from the bars and clubs, people talking in whatever languages they were, every single car, footstep, and even sound of a pin drop. This hostel was on Long Street, a place known for partying so it was loud all night. Literally, there were people and music until about 5 in the morning! I would of stayed out longer but I had to wake up early to abseil…or so I thought. That morning, the weather didn’t look so hot. I called the company and they told me it was closed today but to try again Wednesday. Ugh…

Once again, since my plans were shot down, I went with Mo on his quest to have an encounter with a cheetah at a place called The Cheetah Outreach. It’s the one, and one of the only things he wanted to do while in South Africa. After a mishap on the train, getting lost in Somerset, and baffling locals (some locals who asked where we were from found it to be the craziest thing in the world that an American and an Iraqi were traveling together) we finally found the outreach after what seemed like forever. This place had animals like caracals, servals, meerkats, bat-eared foxes, and of course cheetahs just to name a few. I already had an encounter with a cheetah back in June so I figured I would just look at all the animals while Mo handled his cheetah. I got bored really quick haha! I asked one of the workers if I could pet any of the other animals there. She said all the animals aren’t used to human interaction but I could try with the bat-eared foxes. “I’ll do it!” 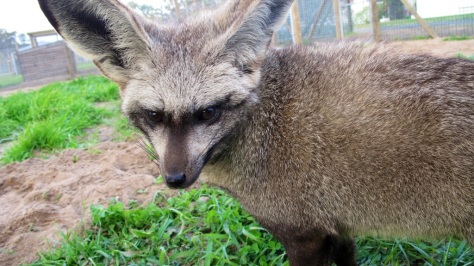 I’ve never seen foxes quite like these ones before. They had gigantic ears and they looked like little bandits from the way a strip of black laid across their triangular faces. They were feisty little suckers, but I was able to get them to come near me eventually. They were fairly small adult foxes, maybe about the size of a lion cub. It was cool because we were virtually some of the only people at the Outreach so we took our time with the encounters.

Afterwards, Mo and I made our way back to the train station where we would part ways for the last time. He would be heading to the Netherlands soon. We said our goodbyes and I waited for my next train as he rode off in his. I’m starting to feel more like a local with the amount of trains I have been on here. I’m remembering all the stops and which trains go where and what times they leave and arrive. After an hour of daydreaming, my train finally arrived and I went home. Of course some of my boys were there waiting for me, so I hung out with them for the rest of the evening.

One thing I always look forward to here is what Mama Zulu whips up for dinner. So far, I haven’t been disappointed. Everything she makes is emaculate and old fashioned. It’s not just her cooking, but also her daughter Lelethu’s cooking as well. I was starving tonight and it’s been awhile since I had lunch. I could smell what was for dinner as soon as I walked into the kitchen. It smelled like fish. Please no. Maybe my sense of smell was deceiving me today? Maybe it’s chicken. I sat at the dinner table and saw my fears come to fruition. It was definitely fish.

Nooooooooooo! I hate seafood so much! Except for calamari, I can’t stand the fishy taste. It’s more of a mind game than anything; fish are ugly. Lobsters are uglier. Crabs are on the same boat. Shrimp are the absolute worst! I can’t blame Zulu. She had no idea I didn’t like seafood. If Zulu or Lelethu sat at the table, I would of forced myself to eat a piece of fish out of respect. I let the spanish girls have my share. It was hake fish by the way. Fortunately, there were mashed potatoes and sandwich meat available so I managed. I wanted to force myself to try fish back in Zanzibar but I just couldn’t do it. I could not eat them here or there; I could not eat them anywhere (Green Eggs and Ham ;). ) By far the best thing Zulu prepares is chicken. It seems like every other night we would get chicken prepared in a different way, but each time was savory. Speaking of chicken, take a look at this:

Chicken heads! The kids eat this at school during intervals. They eat the meat off the neck and eat around the chickens face. This would never, ever fly in America! Not only did they have fried, greasy chicken heads, they also sold chicken feet. The kids would suck on the insides of the talons. The women who sold these chicken parts to the learners would always laugh at me because of the looks I gave when I watched a kid suck out the insides of a chicken’s head. Haha gross!

The kids wanted to phone their idol, Chris on Wednesday. That still might happen, but I didn’t know how long the abseiling would take so I messaged Chris telling him I would call today just in case. I called around 6pm here, which meant it was noon where he lived. Mawande called him from my phone but he had a hard time recognizing his voice, so he passed it over to Toy Toy. Same thing. Toy Toy didn’t recognize his voice either. In South Africa, to call someone from the States, you have to first dial some weird code and then the number. I thought I may have dialed wrong. Toy Toy handed me back the phone and I had to make sure myself if it was him or some random number I dialed. It was him, I think. He literally just woke up and had that “just woke up” tone in his voice. It’s safe to say he never got my message because he was still asleep! I handed the phone back to Mawande and assured him that it was Chris. The boys talked to him for a few minutes but afterwards were still a little unsure if it really was him or not haha! I told them I would have to call again another day when he was more awake.

I have one more story to tell before I end this post. After I came home on Tuesday from the library, I accidentally broke my key to the door of my shack! I just stuck it in, turned it, and the main important part of the key broke off and fell inside the door. $&#T! Mama Zulu was going to be so angry! But it was foolish of me to think so, because she’s such a sweetheart; incapable of such an emotion. She was just worried that I couldn’t get in for awhile. It was no big deal for me, I just felt like a moron that I broke her only remaining key to the shack. I had to wait for the spanish girls to get home with their key so they can let me in, and also my boys who were waiting with me like loyal soldiers. My night ended playing Monopoly that RiRi had brought over. They had some zany rules for that game I never even heard of. Soon enough, I actually fell asleep as they continued playing Monopoly and playing with my electronics.

Eventually they woke me up, gave me my gadgets and headed home. Tomorrow my drought of not doing anything extreme would end – I would be rappelling down the edge of Table Mountain!